Celebrate Diwali, the Festival of Lights, in Mauritius

Thursday, November 4, 2021 is Diwali in Mauritius. Diwali is a public holiday on the island. It marks the end of a five-day celebration, aligning with the new moon (therefore the darkest night) according to the Hindu calendar.

Mauritius has the third-highest Hindu population in the world, behind India and Nepal. Hindus make up just under half the island population.

Mauritius is multilingual, multicultural, multi-ethnic and multi-religious, which is part of its appeal for expats living on the island. This time of year is especially good to be in Mauritius as the island lights up – literally. Dr Lid King, director of The Languages Company, UK, wrote a paper about how a city nurtures diversity and helps it to thrive. He says cultural celebrations such as Diwali are one of them. “Music, theatre and food become the shared experiences of city communities. And people also change in terms of their personal lives – not only in the food that they eat and the music they enjoy but in the friends that they make and the families that they create. Such sharing is characteristic of thriving multilingual communities,” he writes. 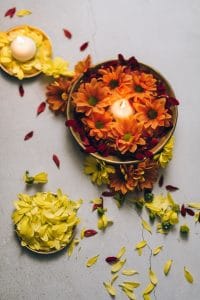 Diwali is also known as Deepavali, Dipavali, Dewali, Deepawali or the Festival of Lights. The word “Diwali” derives from “deepavali”, which means row of lamps. Diwali in Mauritius is synonymous with happiness and light, and is a celebration of the “victory of good over evil”.

There are many legends and stories associated with Diwali, and several gods and goddesses are celebrated. Some honour the return of Lakshmi, the goddess of wealth, who does her rounds at this time to find the prettiest dwelling. Homes, offices, gardens and walkways are lit with small clay lamps called “diyas” and strings of electric bulbs to guide her. That’s where the Festival of Lights reference comes from.

Leading up to Diwali, houses are cleaned and walls are painted. Floors, doorsteps and courtyards are decorated with artistic “rangoli” created from rice flour, which doubles as food for birds and insects.

“Dhanteras” is the name given to the first of the five-day celebration. “Dhan” means wealth so people buy metal gifts for each other – and themselves – to encourage that state of being. It can be anything from cutlery and silver showpieces to jewellery and sculptures, budget dependent. Why? Because they attract abundance and good luck, and deflect negative energy.

On the eve of Diwali in Mauritius, Hindus exchange gifts and recette gateau Diwali with loved ones, and dedicate time to prayer.

A fireworks display marks the end of the festival, with plenty more sparkles and burning of effigies of Ravana (a mythical tyrannical king of ancient Sri Lanka) to keep evil spirits at bay.

What to wear and eat for Diwali in Mauritius 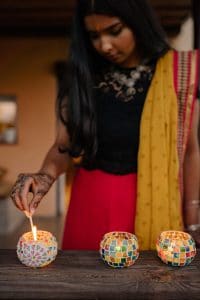 Gulab jamun made the Mauritius way involves condensed milk, more deep-frying and dropping into syrup. If you like your sweets even sweeter, you’ll love barfi – full of condensed milk and sugar, local fruits and spices. Meanwhile, milk and chickpea flour are the main ingredients for the most popular laddoos in Mauritius.

If you want to buy some delicious recette gateau Diwali during the festival, it’s best to pre-order from Bombay Sweets Mart. Established in the capital Port Louis in 1969, Bombay Sweets Mart supplies Indian sweets and snacks in Mauritius. Ashoka Sweets in Curepipe is another popular go-to. And the same applies here – order your recette gateau Diwali in advance or risk losing out!

We invite you to discover our properties for sale in Mauritius.