The colours of your new life in Mauritius

Picture the scene. Couples strolling along a Boulevard lined with flamboyants in full bloom towards the heart of the Mont Choisy Smart City. Their mission? To meet friends at their favourite restaurant, or have a coffee, or browse in a newly discovered boutique.

Then there are the families walking, jogging or cycling along the Boulevard, a dedicated zone free of polluting vehicles. Or the workers heading for their new offices at the commercial centre, or the locals off to find a shady spot to rest, read a book and watch the passers-by.

All this is practically on your doorstep if you live at Les Residences de Mont Choisy, the boutique Real Estate Scheme by 2Futures in the north of Mauritius.

The flamboyants, also known as flame trees, are famous for showing off their bright-red bursts of colour during the Mauritian summer. They are most resplendent in November and December, but the summer months on the island extend until April. If you live on the island, you get the best of them all-year round. 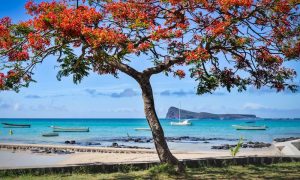 One thing you can bank on in Mauritius is birdsong. That and the sound of the gentle breeze moving through the trees, whether filao, or palm, flamboyant or banyan, all of which you’ll see in this part of the world. These are the little but big things that contribute to the colourful atmosphere of Mauritius – in sound, sight, culture and cuisine.

The island is home to some of the world’s rarest bird species. You can learn to identify them with the help of a smartphone app produced by the African Bird Club. It’s called Birds of Mauritius and is free to download from the Google Play Store and Apple iStore.

Mauritian resident and bird photographer Jacques de Spéville says the app is a must for those who wish to discover more about the birds of Mauritius and Rodrigues. Users can reference photographs, calls, songs, text and maps in their efforts to identify the island birds. What’s more, it’s programmed to enable the user to maintain personal checklists.

According to Birdlife International, the Mauritius Kestrel (endangered) was once considered the world’s rarest bird. The Echo Parakeet (endangered) and Pink Pigeon (vulnerable) numbers reached a desperately low point in the mid-1980s. Sanctuaries at Ferney and Ile aux Aigrettes are doing a lot for their welfare and are well worth a visit.

Island accommodations for expats: the best choices in Mauritius

Foreigners love living in the north of Mauritius