More South Africans are moving to Mauritius, and here’s why

Mauritius is edging out developed countries like the United Kingdom, Australia, and New Zealand as a destination amongst South Africans who want to emigrate. Many of these folks are moving to Mauritius, which is but some 4,000 kilometres southeast of South Africa, not only because of geographical proximity.

South Africans also pack their bags for Mauritius not just for the island nation’s natural beauty and splendour. Greater financial and tax security appears to be the weightier factor for their decision to live permanently in Mauritius.

This thinking is fueled by talks of the South African government using taxpayers’ money to bail out mismanaged state-owned enterprises. A recent report also said that South Africans will likely pay for the country’s Covid-19 support package through future taxes. There are also fears that South Africa’s Covid-19 support measures will eventually lead to more state interventions on private businesses and more power to the politicians and bureaucrats in the country. 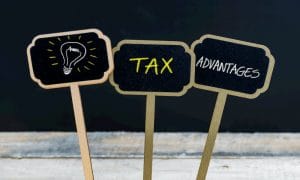 Other tax advantages enjoyed by those moving to Mauritius include:

Exchange controls in Mauritius are also quite liberal such that there are no restrictions on repatriation of profits or dividends from overseas companies operating in the country.

The Mauritian government has likewise set up several entry mechanisms for foreigners to live in the island nation. Mauritius, for instance, grants occupation permits to foreigners seeking jobs in Mauritius. Similar permits are granted to those self-employed and to entrepreneurs setting up businesses in the island nation. The validity of occupation permits is for three years, which is renewable under certain conditions.

Many South Africans committed to moving to Mauritius typically find attractive the real estate schemes approved by the Economic Development Board of the island nation. In these schemes, foreigners can acquire permanent residency with the purchase of a residence priced at a minimum of USD375,000. Such an investment sure looks a hefty stake. In the long haul, however, the more stable political and economic climate in Mauritius provides a better opportunity not only for building wealth but also for having a quality of life rarely found elsewhere.

Moving to Mauritius offers the thrills of outdoor adventures

Moving to Mauritius? Choose Mont Choisy—its more than a beach