Most real estate agents concur on this when investors ask them about upscale choices on a new apartment for sale in Mauritius. The options they’d give would most likely include those on the island’s west coast like the Manta Cove of 2Futures.

The residences on this Black River district of Mauritius, particularly those on the oceanfront, has great investment potential as tourist rental properties. The west coast of the island not only offers mesmerising views of undulating surf and rolling mountain ranges. It also provides plenty of life and leisure activities amidst the unadulterated natural beauty of the Mauritian countryside.

Tamarin Bay, erstwhile known as Santosha Bay, is one of the west coast’s centrepieces and rates as one of the world’s top surfing destinations. It gained worldwide attention in the 1974 classic surfing film documentary Forgotten Island of Santosha. 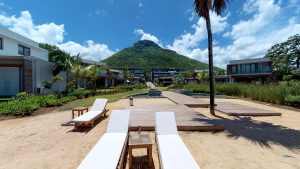 Hallmarks of an endearing locale

La Tourelle is another landmark iconic of the island’s west coast. The mountain not only provides an impressive backdrop to selections of apartment for sale in Mauritius west coast. Rising to 1,600 feet above sea level, its peak also offers a panoramic view of the coast, the Black River gorges, and the UNESCO world heritage site, Le Morne Brabant.

The full range of amenities in Tamarin’s Black River area makes its homes a tempting selection not only for visiting tourists. The home market in the island’s west coast also caters to expats, given the varied facilities in and around this area.

Leisure and sports activities in the west coast of Mauritius extend inland to a golf course. Just a short distance south of Tamarin, exciting choices of outdoor activities abound at the Black River Gorges National Park.

The Black River district is host to a shopping village at Cascavelle about 10 kilometres to the north of the Tamarin. Cascavelle is also now home to a new campus of the Middlesex University of London, which opened in 2017.

For pre-primary and primary schooling under the French curriculum, the local choice is Paul et Virginie. Other schools in Black River include the English co-educational Telfair International Primary and the English-medium West Coast International Secondary School.

Faithful adherence to international standards of quality is the underlying theme too in the home picks in Mauritius’ west coast. Manta Cove apartments manifest this world-class calibre in its architecture blending in complete harmony with the property’s beachfront setting.

Investing in a new apartment for sale in Mauritius also comes secure and stress-free with a choice in Manta Cove. This development is a gated residential complex with professionally managed rental and maintenance solutions. Contact 2Futures for more info on this property in the west coast as well as other upscale picks in the north.

Buy an apartment in Mauritius as staycations poised to rise